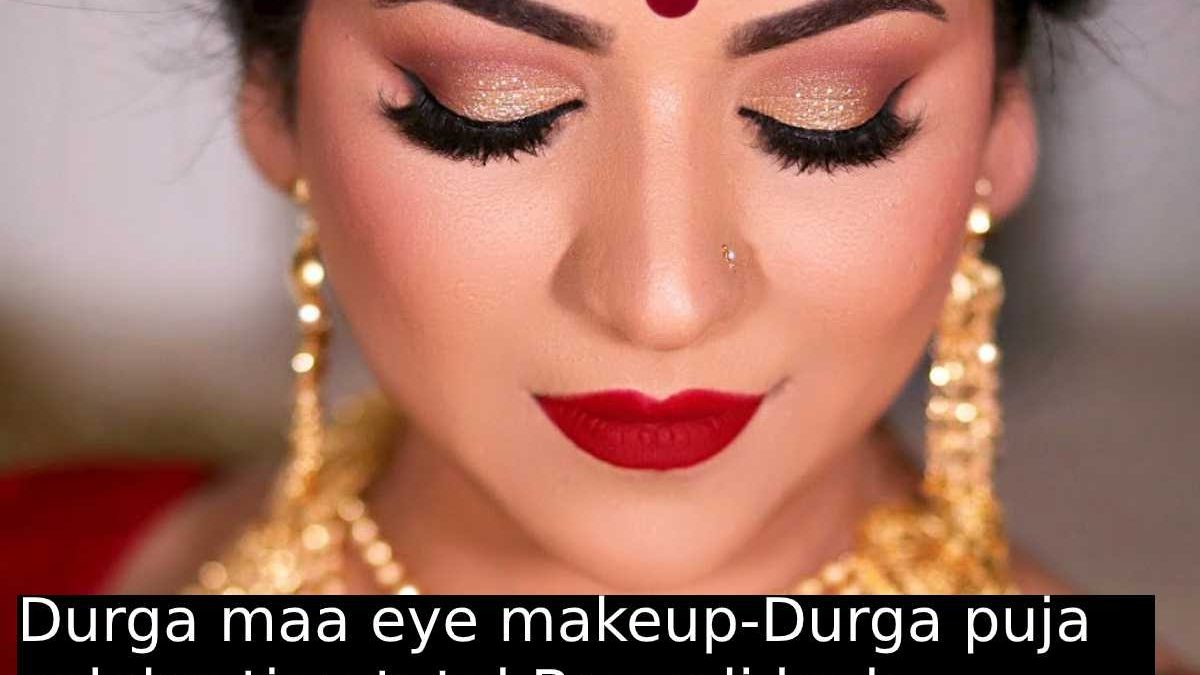 Durga maa eye makeup- Hi, lovely people. Welcome back to my blog. Durga puja is celebrated on one October and ends on five october. For ages now, it has been celebrated with full of enthusiasm in the states of assam and orisa.

Hindus celebrate this festival with a lot of excitement, and ladies doll up like Durga maa. So now ill tell you how you can do makeup like Durga maa. If you are tensed about the durga puja look, then don’t worry. You are in the right place for it. So here for you, all some tips to get all decked for Durga puja

Also Read– how to make your self more attractive

Primer: Is the main important step for the Durga Maa eye makeup look

The protagonist in the realm of makeup is primer. Primer is one of the important things for your skin. It doesn’t make your makeup sticky. Soggy.Also, It helps you with a better base of the foundation.

For me to ask, I would advise you to use Lakme absolute blur perfect primer is best when used to Durga m aa eye makeup look as it is lightweight, long-lasting, and very easy to apply to all kinds of skin.

Bb cream is the next step after primer. It helps in hiding your skin flaws spotless and keeps your skin feeling renewed and rejuvenated.
Also, In my opinion, using beauty balm is popular BB cream. Also, it has a lot of different shades and varieties which will go along all types  of sin

You know Durga has a whiteish colour, so choosing a foundation that is yellowish in the shade will make your makeup look to make real. I would prefer to use the absolute Lakme foundation. Dab all over your face for a fresh and perfect look

Eyes: Is the main important step for the Durga Maa eye makeup look

It  Plays a vital role in Durga puja 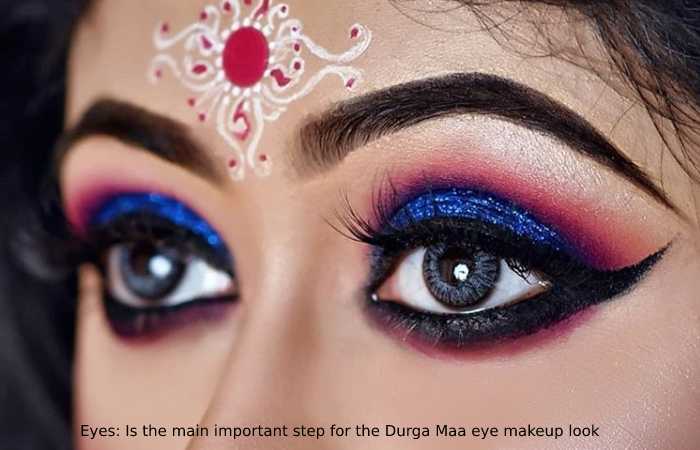 Here in this makeup, look eyes play a vital yet most critical role . Because ,this gives perfect look of Durga and for the puja. So using the best Kajol and eyeliner will do wonders for your look. Also, If you get this right, then everyone’s gonna be asking you about your look.

For to have perfect Durga maa eye makeup, a perfect eye shadow colour is a must which is red and brighter red. Chose revolution eye shades are easy to blend in. Because, it gives  beautiful texture. Apply it to your eyelids all over.

Kajol: Is the main important step for the Durga  eye makeup look

One of the important for Durga maa eye make-up look.

In my preference, use Lakme eye conic Kajol as it is smudge-proof and stays all long. Also, You can apply it as an eyeliner too. Use it on your water liner and use it thick so that your eyes will exude elegance all day long. Also, you can add a little white kajal if you wish to.

Eyeliner: Is the main important step for the durga maa eye make-up look

Eyeliner plays a vital role in Durga maa eye makeup. Apply a broad eyeliner so that it makes your eyes look bigger and pop out.

Also, How about applying some of the blush on your cheeks to make them look brighter try swiss beauty blush to make it look more natural

A perfect lipstick makes the perfect look and finishes with a yaay. Also, Red lipstick is the key to this perfect look.

In conclusion, Red bindi will be the last for you to complete the look. a big batto will do it and will make you look more traditional.

What Is Qod Hair Treatment- Review, Everything You Must Know About It?

Foods to Eat to Have Beautiful Skin!

The Uplifting And Moisturizing Power Of Rosewater Mist

The Latest Sunglasses Trends In 2022

The Importance of Facial Sunscreen

Embrace The Beauty Of Nature